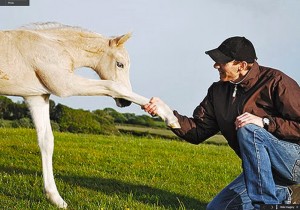 We’ve bred numerous palomino Welsh cobs & part breds at our welsh cob stud over the years. Below are photos of just a few.

We currently have the palomino welsh cob stallion Aragorn Aur standing at stud. He’s a welsh cob, section D, registered with The Welsh Pony and Cob Society & with the British Palomino Society.

Palomino is a coat color in horses, consisting of a gold coat and white mane and tail. Genetically, the palomino color is created by a single allele of a dilution gene called the cream gene working on a “red” (chestnut) base coat. However, most color breed registries that record palomino horses were founded before equine coat color genetics were understood as well as they are today, and hence the standard definition of a palomino is based on the coat color visible, not the underlying presence of the dilution gene. 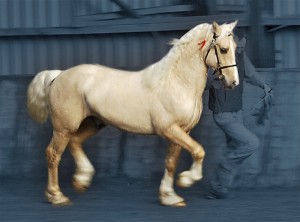 Due to their distinct color, palominos stand out in a show ring, and are much sought after as parade horses. They were particularly popular in movies and television during the 1940s and 1950s. One of the most famous palomino horses was Trigger, known as “the smartest horse in movies”, the faithful mount of the Hollywood cowboy star Roy Rogers. Another famous palomino was Mr. Ed (real name Bamboo Harvester) who starred on his own TV show in the 1960s.

Palomino horses have a yellow or gold coat, with a white or light cream mane and tail. The shades of the body coat color range from cream to a dark gold.

Unless also affected by other, unrelated genes, palominos have dark skin and brown eyes, though some may be born with pinkish skin that darkens with age.[1] Some have slightly lighter brown or amber eyes.[2] A heterozygous cream dilute (CR) such as the palomino must not be confused with a horse carrying champagne dilution. Champagne (CH) dilutes are born with pumpkin-pink skin and blue eyes, which darken within days to amber, green or light brown, and their skin acquires a darker mottled complexion around the eyes, muzzle, and genitalia as the animal matures.[1]

A horse with rosy-pink skin and blue eyes in adulthood is most often a cremello or a perlino, a horse carrying two cream dilution genes.[3]

The presence of the sooty gene may result in a palomino having darker hairs in the mane, tail and coat.[4] The summer coat of a palomino is usually a slightly darker shade than the winter coat. 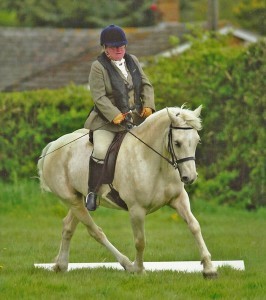 Color breed registries
In the United States, some palomino horses are classified as a color breed. However, unlike the Appaloosa or the Friesian, which are distinct breeds that also happen to have a unique color preference, Palomino color breed registries often accept a wide range of breed or type if the animals are properly golden-colored. The Palomino cannot be a true horse breed, however, because palomino color is an incomplete dominant gene and does not breed “true”. A palomino crossed with a palomino may result in a palomino about 50% of the time, but could also produce a chestnut (25% probability) or a cremello (25% probability). Thus, palomino is simply a partially expressed color allele and not a set of characteristics that make up a “breed.”

Because registration as a palomino with a color breed registry is based primarily on coat color, horses from many breeds or combination of breeds may qualify. Some breeds that have palomino representatives are the American Saddlebred, Tennessee Walking Horse, Morgan and Quarter Horse. The color is fairly rare in the Thoroughbred, but does in fact occur and is recognized by The Jockey Club.[7] Some breeds, such as the Haflinger and Arabian, may appear to be palomino, but are genetically chestnuts with flaxen manes and tails, as neither breed carries the cream dilution gene. However, in spite of their lack of cream DNA, some palomino color registries have registered such horses if their coat color falls within the acceptable range of shades.

While the color standard used by palomino organizations usually describes the ideal body color as that of a “newly minted gold coin” (sometimes mistakenly claimed to be a penny), a wider a body color range is often accepted, ranging from a cream-white color to a deep, dark, chocolate color (“chocolate palomino”) that may actually be silver dapple or liver chestnut with a flaxen mane and tail.

The place of origin of the Palomino probably never will be conclusively determined. Myths and legends of various countries shroud the beginnings of the golden horse. The golden horse with ivory-colored mane and tail appears in ancient tapestries and paintings of Europe and Asia, Asia.

The Palomino has come down through the pages of history. During the days of the Crusades, the Emir Saladin presented Richard-Coeur-de-Lion with two splendid war horses, one was a gray and the other a Golden Palomino.

These splendid golden horses were favored by her Majesty Isabella de-Bourbon, that beloved queen who pawned her jewels so that the expenses of the expedition which discovered the New World might be paid. Queen Isabella kept a full hundred of these animals and as the chosen favorites. A commoner was not allowed to even own one. It is recorded that Queen Isabella sent a Palomino stallion and five mares to her Viceroy in New Spain (now Mexico). From there, the blood spread into Texas, and from Texas it came to California.

The word “Palomino” is a Spanish surname. Many feel that Palomino is only a color and not a breed, which is true that the color of Palomino comes in all breeds, but the Palomino of Spanish times, the Golden Dorado, was as close to being a breed as any strain of horse. The Dorado was of Arabic-Moorish-Spanish blood and breeding, closely akin to the Arabian and the Moorish Barb. This point has been noted in an old book and printed in Barcelona in 1774. 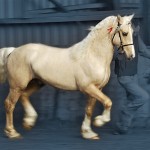